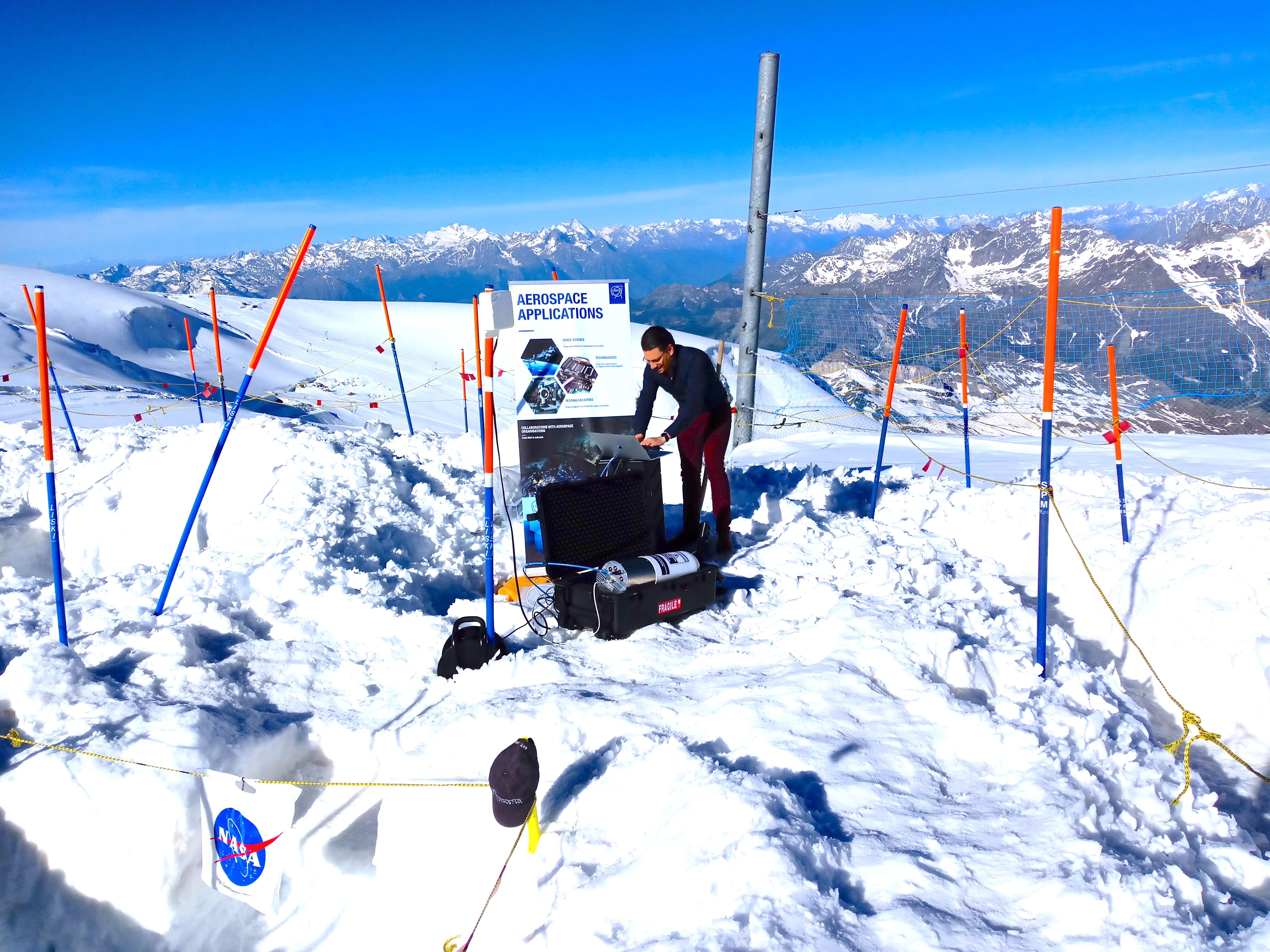 The CERN Radiation Protection Group contributes to IGLUNA with the implementation of the CERN Radiation MOnitoring Electronics (CROME). The CROME project is developed to track on-site radiation levels, e.g. during the operation of CERN's accelerators, such as the Large Hadron Collider. CROME is CERN’s new generation of radiation monitoring system. It measures dose rates as low as 50nSy/h over a range of 9 decades without the use of auto scaling and is capable of tracking fast pulsed radiations. The CROME System will upgrade and replace one of its precursors during the LS2, Long Shutdown 2 (2019-2020) and would be the unique monitoring system by 2025. On the Matterhorn glacier, the elevated natural background spectrum induced by the high-altitude atmosphere interaction with cosmic rays and other high-energy radiation sources, provide a natural laboratory for radiation studies. It provides the perfect test-bed to understand the shielding effectiveness of water (ice) in space environments, as well as the liability of our CROME system under low background radiation environments.

In the framework of the demonstrator pilot project IGLUNA, the CERN Radiation Protection Group contributes with the implementation and experimentation of the CERN Radiation MOnitoring Electronics (CROME). The CROME project is developed to track on-site radiation levels during the operation of CERN's activities and protect CERN’s users and personnel by triggering interlocks based on doses calculations and configurable conditions.

As a side effect of their operations, CERN accelerators generate mixed ionizing radiation in local areas due to the interaction of high-energy particles with surrounding stable matter. This secondary field, known as stray radiation, differs significantly from the ionizing radiation produced by the nuclear industry in terms of:

Accurately measuring tracking such generated mixed radiation behind shielding requires very specific instruments. CERN Radiation Protection is currently developing a new state of the art radiation monitor, CROME (CERN RadiatiOn Monitoring Electronics), which measures dose rates as low as 50nSy/h over a range of 9 decades without the use of auto scaling. When translated into electrical current, the front end electronic are capable to measure a flow going from 1fA to 1uA with an accuracy of +-1%. CROME is the new generation of CERN radiation monitors and will follow up one of its precursors, the ARCON system, after the LS2, the Long Shutdown 2 (2019-2020). CROME is a more efficient and reliable system accompanied by a high degree of modular capabilities.

The Matterhorn glacier (3500-3900m) provides a natural laboratory for radiation dosimetry studies due to the elevated natural background spectrum induced by the high-altitude atmosphere interaction with cosmic rays and other high-energy radiation sources. The purpose of the CROME Radiation Monitoring Demonstration Project in the IGLUNA framework is two-fold: 1) The main science objective is to understand the high-altitude neutron/y spectrum and the shielding effectiveness of cryogenic hydrogen as the interactive medium in space environments. 2) The main engineering objective is to understand the system stability and reliability in low background neutron/y radiation environments.

The system architecture to investigate this relationship is build-up out of the following main subsystems: 1) two CROME Measuring and Processing Units (CMPU). The modularity of the CROME products enable the possibility to decouple the front-end section from sources of electromagnetic and thermal interference. This subsystem is built up out of a highly pressurized ionisation chamber (hydrogen /Argon detector) and a metallic enclosure which contains the electronics part composed of two parts. The first part, the read-out electronics is responsible for the real-time measurement of ambient dose equivalent rates with a measurement range for neutron radiation: [1 fA – 4 nA]® [25 nSv h-1 – 0.1 Sv h-1]. The second part is the control and processing system. This subsystem is responsible for the collection and processing of data from various data sources captured in the read-out electronics component, 2) The power system, the CROME Uninterruptible Power Supply (CUPS) will maintain itself through the back-up system, its internal battery, 3) The Data Network. The control and processing unit of the CMPU’s electronics part is responsible for the direct transmission of measurements results via Ethernet/4G network to CERN’s internal database, the ground segment, for data analysis.

The CERN Radiation Protection Group contributes to IGLUNA with the implementation of ...